Dozens of bedbugs and their eggs and fecal material on a metal bed frame. Jerome Goddard

Bedbugs are back with a vengeance. After an absence of around 70 years, thanks to effective pesticides such as DDT, they’ve been popping up in fancy hotels, spas, department stores, subway trains, movie theaters – and, of course, people’s homes.

I’m a public health entomologist. In the course of my work, I’ve studied these little bloodsuckers, even letting bedbugs feast on my own appendages in the name of science. No one likes dealing with bedbugs – and there are ways to minimize your chances of needing to. 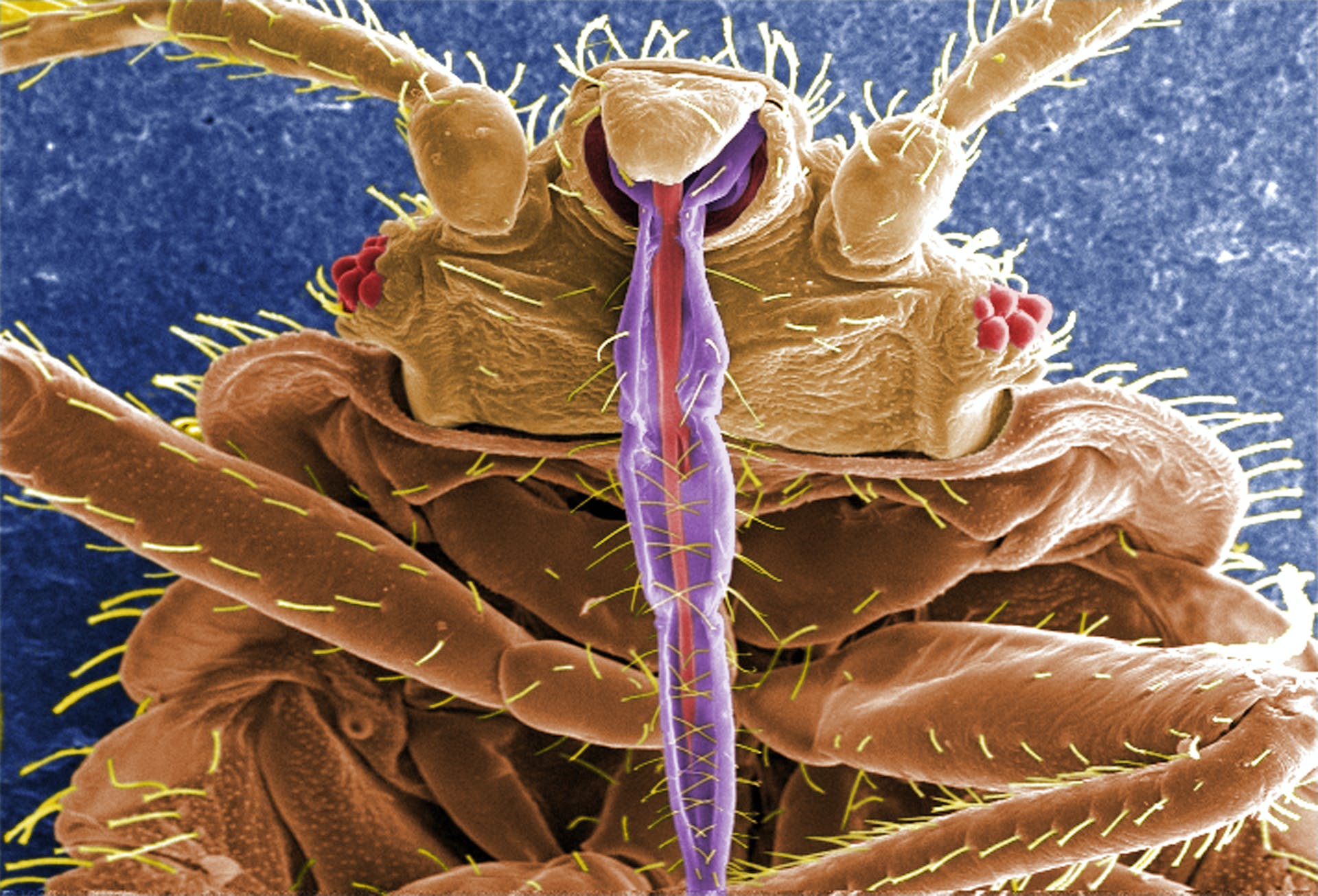 The common bedbug, Cimex lectularius, has been a parasite of humans for thousands of years. Historically, these tiny bloodsuckers were common in human dwellings worldwide, giving the old saying “sleep tight, don’t let the bedbugs bite” real meaning. They had nearly disappeared in developing countries until the mid-1990s, when they began making a comeback because of restriction or loss of certain pesticides, changes in pest control practices and increased international travel. In many areas around the world, they are now a major urban pest. 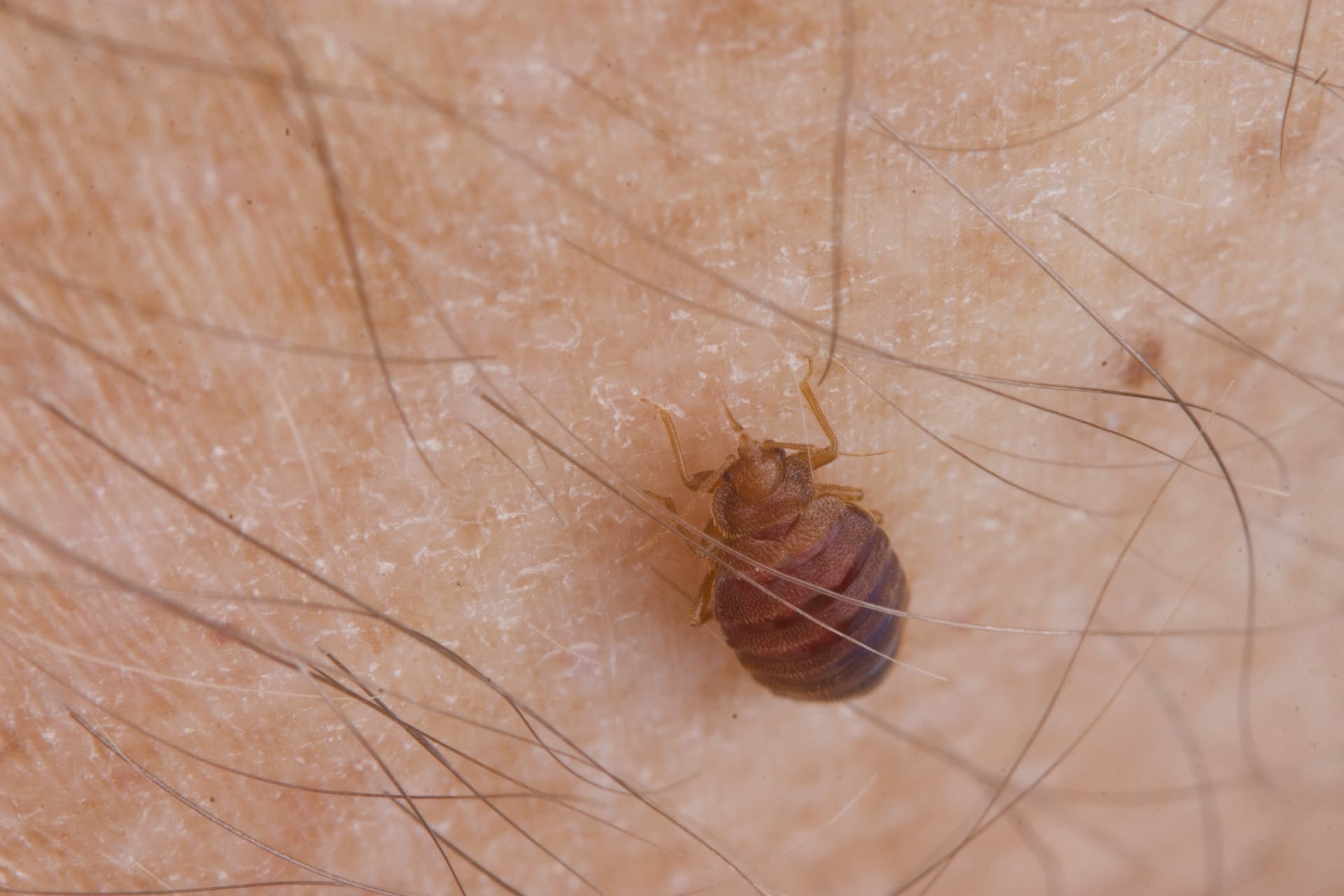 A bedbug extends its beaklike proboscis to feed on human blood. Jerome Goddard

Adult bedbugs are less than a quarter-inch long (about 5 mm), oval-shaped and flattened, resembling unfed ticks or small cockroaches. Tucked backward underneath their head they have a long proboscis – a tubular mouthpart they can extend to take a blood meal. A bedbug needs only between three and 10 minutes to consume up to six times its weight in blood in a single meal.

Adults are reddish brown, while the babies are extremely tiny and yellowish-white in color. They hide in cracks and crevices, generally within a few feet of a bed, coming out only to feed on an unsuspecting host. Then they run back to their hiding places, where they mate and lay eggs.

Houses can become infested with thousands of the little bloodthirsty pests in the mattress and box spring, where they leave telltale black fecal spots. In severe infestations there may be thick feces, hundreds of shed skins and eggs several millimeters thick.

Biggest health impacts may be psychological

Their principal medical impacts are related to nuisance biting and the associated itching and inflammation. The most common bite reactions are itchy red spots at feeding sites that usually go away in a week or so. Some people have complex skin reactions, including hives and blisters, or allergic responses. 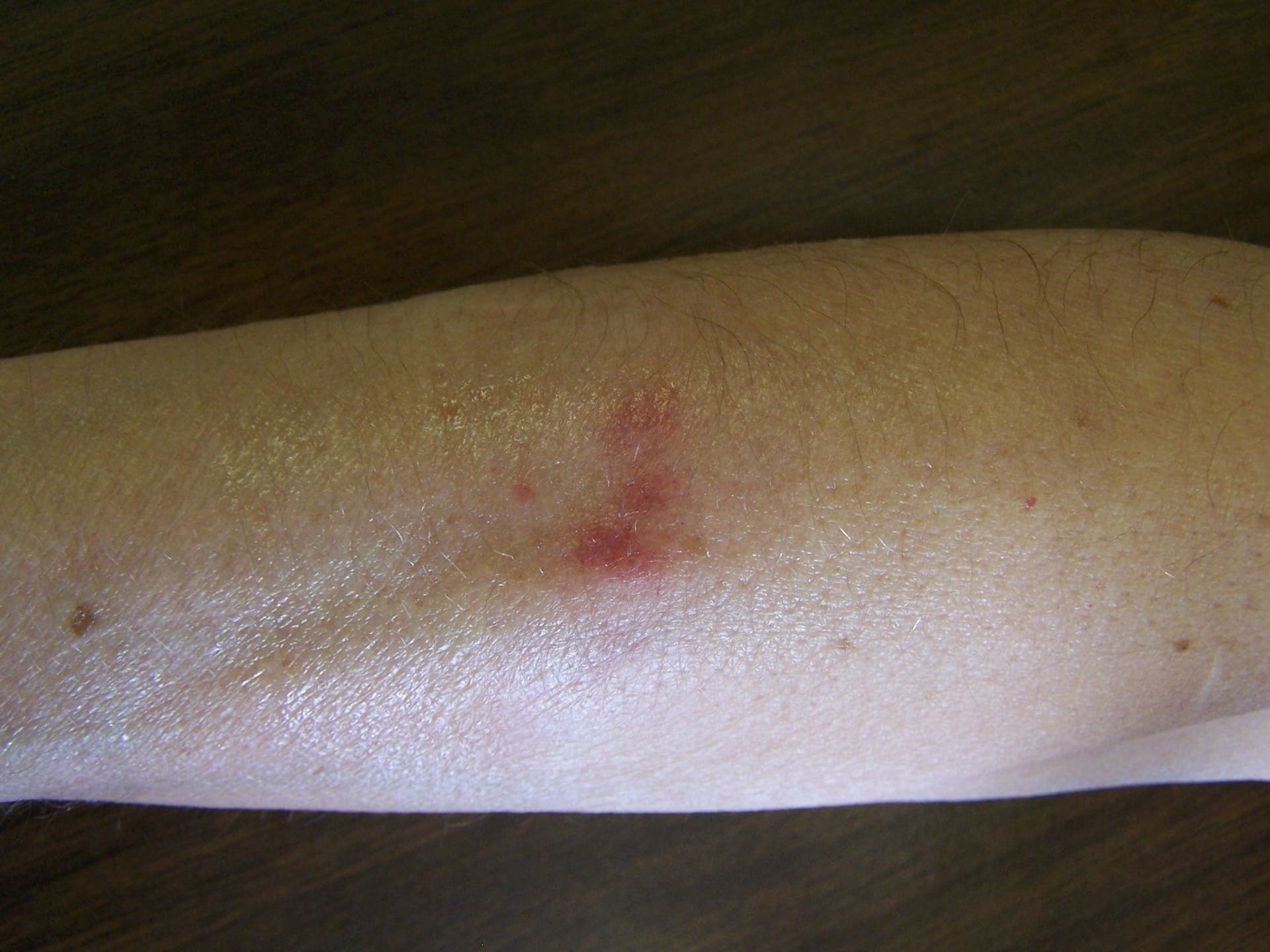 The marks from bedbug bites can persist on human skin for several days. Jerome Goddard and Kristine T. Edwards

Then there’s bedbugs’ emotional and psychological effects on their victims. Run-ins with these parasites can trigger nervousness, anxiety and insomnia. Bedbugs commonly come with a side effect of constant worrying and feelings of shame. One distressed Canadian expressed it this way:

“To be honest, until you go through [an infestation], you have no idea just how horrifying it really is. It is just natural for you to become paranoid; you lose sleep, you end up dreaming and thinking about bedbugs – they just consume every fiber of your being.”

One study of people exposed to bedbugs found about half reported sleep difficulties and social isolation associated with the infestation.

My colleague and I analyzed 135 internet posts concerning bedbug infestations. The majority, 81% of the posts, reported three or more behaviors commonly associated with post-traumatic stress disorder – reactions like reexperiencing the event through intrusive memories and nightmares, startle responses and hypervigilance. Six posts detailed intense and repeated cleanings of homes or offices. Five posts reported persistent avoidance of people, activities and places that might lead to transmission of insects or arouse recollections of the original encounter. And five posts detailed suicidal thoughts or attempts. There are other anecdotal reports of suicides or drug overdoses by people struggling with bedbugs. 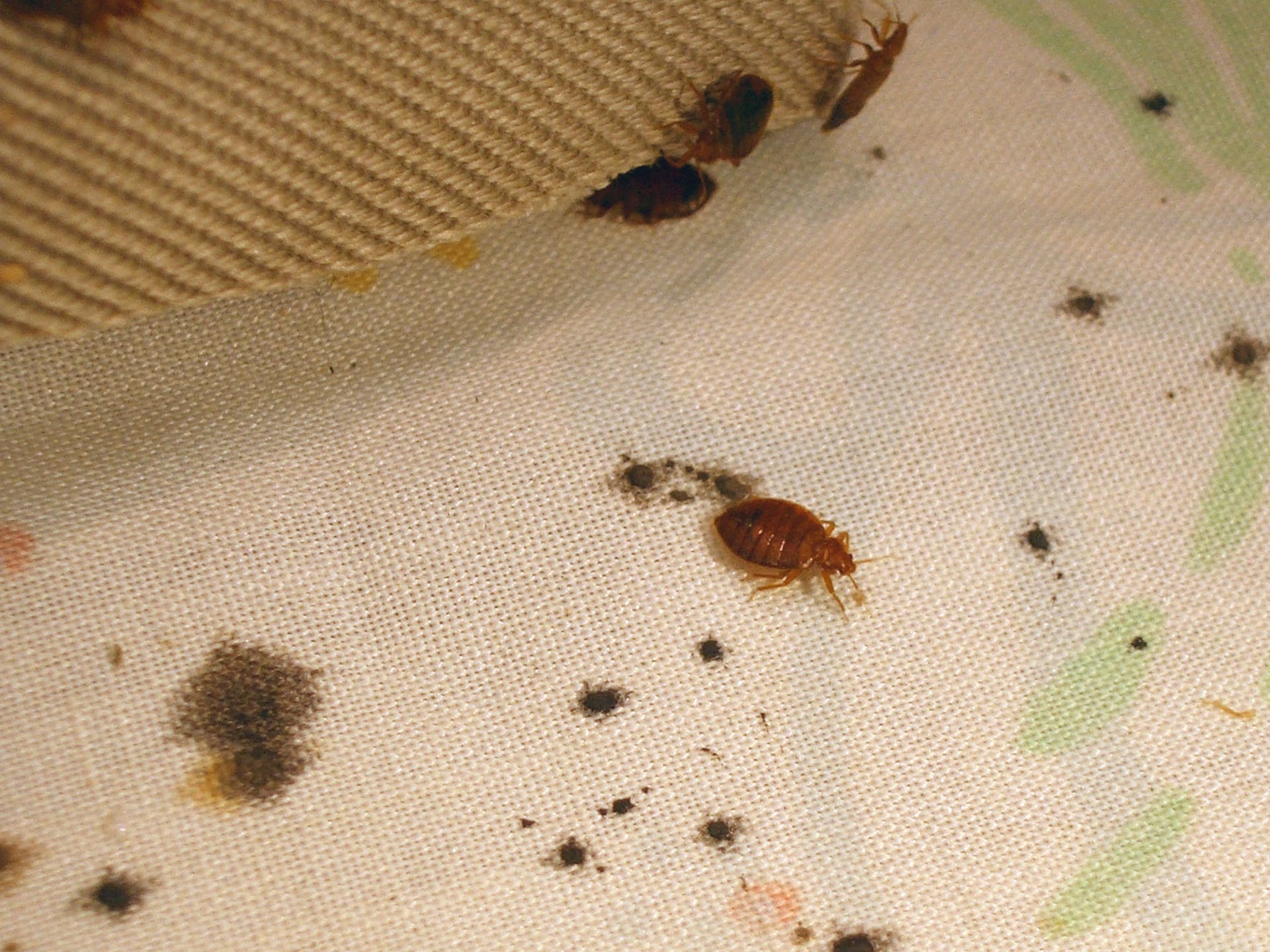 You can check for the telltale marks of a bedbug infestation on a bed’s mattress and box spring. H.J. Harlan, U.S. Armed Forces Pest Management Board, CC BY

How to protect yourself from bedbugs

Not every hotel room has bedbugs, but some do. Simple precautions can help protect you and your belongings from infestation.

Leave all unnecessary items in your vehicle, such as extra clothing, gear and equipment. When first entering your hotel room, place luggage in the bathroom until you have had a chance to inspect the place. Pull back sheets and check the mattress and box spring for live bedbugs or black fecal spots. If any bugs or suspicious signs of infestation are found, go to the front desk and request another room. Because bedbugs don’t usually travel far on their own, other nonadjacent rooms may be perfectly clean of the parasites.

Keeping bedbugs out of houses and apartments can be difficult, especially if you travel a lot. After traveling, unpack luggage outside or in the garage, and wash all clothing from the luggage in hot water and dry on high heat if possible. A dryer is a great tool in the fight against bedbugs. Bedbugs can also hitch a ride into your home on used furniture or items purchased at secondhand stores or garage sales. Be sure to disinfect – more precisely “dis-insect” – those kinds of items. It’s a good idea to never purchase used mattresses or beds, no matter how good a bargain.

What can you do if you are forced to confront these bloodsuckers? A bedbug infestation found in a hotel room should immediately be reported to management. If you find bedbugs in your house or apartment, or in secondhand purchases, it’s best not to try to spray them yourself with over-the-counter pesticides. My recommendation is to contact a competent pest exterminator, who will treat the space with pesticides, use complex heat systems or both to kill the bugs.

Try not to panic. Keep in mind that bedbugs are only insects. They’re not magic. Believe me, they can be killed and eliminated from a dwelling.

Jerome Goddard does not work for, consult, own shares in or receive funding from any company or organisation that would benefit from this article, and has disclosed no relevant affiliations beyond their academic appointment.

Decide which method is best for you

Know the difference between brown vs. green items

Find the right storage for your scraps

Look for dark, crumbly soil after a few months

Sign up here to get the latest health & fitness updates in your inbox every week!